UNDERTAKER VS BRET HART
The Undertaker versus Bret Hart with Shawn Michaels as the special referee match at SummerSlam 1997 was a key character and career moment for all involved. It was one of my favorite main events ever.

In the heart of New Jersey, this really was WWE going all in with the anti-American Hart. The stipulation carried that if Hart didn't win the WWE Championship from The Undertaker, he would never wrestle on American soil again.

A half-hour classic that saw a variety of styles showcased. Technical wrestling on the match, a brawl and of course a famous chair shot. The ending of the match came with Michaels ripping a steel chair out of the hands from Hart who was prepared to use it. Hart then spit in the face of HBK, which prompted him to retaliate swinging the chair but hitting The Undertaker on accident. Hart got the win as Michaels reluctantly counted to three.

This put into motion Hart's heel character as he led the Hart Foundation heel stable. It was an on-screen launch of HBK's rebellious attitude that blurred the lines of real and script with DX. It also brought a new humanized chapter to The Undertaker's character. He now had a feud to settle with Michaels, but was being haunted with the memory and impending debut of his brother Kane.

This was wrestling and this was sports-entertainment. Nothing was absent for any fan in the main event of this SummerSlam classic.

This main event launched a lot of new eras in legendary careers but also set a new tone for WWE's booking. Rarely, if ever seen before, did WWE have open interpretation with characters and their actions. It was very black and white. Good guy and bad guy. Right decision and wrong decision. SummerSlam 1997 began to present scenarios of attitude, morals and entertainment appeal.

Michaels accidentally hit The Undertaker with the chair after Hart moved out of the way. The Undertaker placed blame on Michaels. This then prompted a heel reaction and promo from HBK but some would say the attitude it sparked from him was some of his most likable stuff by some fans. It was the eve of the attitude era where tradition went out the window.

Hart was hated in American arenas, but he was treated like royalty in every other country around the world.

So much in late 1997 triggered the most famous era in wrestling history. SummerSlam 1997 was vital in moving into the final stretch of so many characters and feuds that ushered in the attitude era and WWE's momentum regaining the top spot in their war with WCW.

We got classic fights between Undertaker and Michales which included the first ever Hell in a Cell match plus Kane's debut. Hart and Michaels were still on a collision course for each other which culminated at Survivor Series 1997 where the famous Montreal Screw Job took place. This was the birth of the Mr. McMahon character and really gave true life to DX.

So in three weeks it will be SummerSlam 2013. Sit back, enjoy and think about what piece of history you could be getting ready to watch.

WWF Championship: Bret Hart vs. The Undertaker, One Night Only 1997
Bret Hart and The Undertaker were arguably the biggest lynchpins of the WWF in the 1990’s. In fact, if you watch the Undertaker’s debut at Survivor Series 1990, the first man he locks up with…is Bret Hart. At that point, Taker was a raw green rookie trying to embody the nuances of a character that would essentially transcend the industry. Bret? Well, he was still a tag team wrestler at that point, although he would soon shed that label and go on to a stellar singles career.

From that fateful November day in 1990 through the early half of the 90’s, the two, while unquestionably at the top of the WWF totem pole, never touched one another. One reason was both were faces. Another was they faced completely different types of competition. While Hart, a fantastic, 6’2″, 235 pound pure wrestler, was facing off with guys like Shawn Michaels, 1-2-3 Kid, and his equally, maybe even moreso, talented brother Owen, the 6’10” Undertaker was paired with the giants of the game, stiffs such as King Kong Bundy (well past his prime) and Giant Gonzalez (who never had a prime).

The two men finally met for the first time on the big stage at Royal Rumble 1996. The match was not that good, as Bret was in the middle of a lame duck WWF title reign, simply keeping the belt warm for Shawn Michaels, who was to win it at WrestleMania 12. That entire Bret reign was just awful, as he was essentially booked to look like a joke while Michaels tore through the mid card towards his date with destiny. Gotta love the Kliq days of WWF. Undertaker, at the time having been saddled with shitty workers for the better part of five years, had not yet developed into the all around in ring talent he would become. The result was a lackluster match, one of the few times on a major PPV Bret phoned in a performance. To be fair, Bret had reason, given the booking of his title reign. Then again, Taker-Bret was a dream match for fans back then, and with Bret phoning it in, Taker not yet up to the abilities that have made him the most enduring wrestler possibly ever, and with endless overbooking, the match came off flat.

Bret and Undertaker stayed away from eachother onscreen until summer of 1997. Undertaker had become WWF Champion, unseating Sycho Sid at WrestleMania 13. Bret, on the other hand, had shed his virtuous good guy persona and become the most hated heel in the WWF, the Canadian loyalist. Make no mistake about it, Bret was white hot in this character, and it lead to a Championship match between Taker and Bret at Summer Slam 1997. 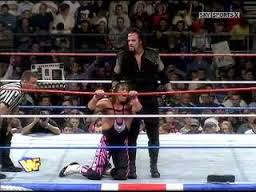 Most fans from that generation have fond memories of that match, and I can’t blame them. Too much. Its a good match, not great. Shawn Michaels was the special guest referee for the match, and, for me, that is the problem with the match. Shawn, at that time, was a glory hog, and with one action in the match seemed to siphon all of Bret’s heel heat onto himself. Shawn was still a good guy, see, and the finish of the match saw Bret introduce a steel chair into the fray. Shawn got wise to it, and questioned Bret about it. Bret, ever the heel dick at this point, spit at referee Michaels, and HBK winded up and swung that chair with reckless abandon in the vicinity of Bret’s forehead. Only Bret ducked, and Michaels mistakenly hit Undertaker, costing him the match and making Bret a five time WWF Champion, something only Hulk Hogan had achieved prior to Bret. So instead of the issue being Undertaker pissed at Bret for taking his title, the heat was transferred to Shawn’s having cost Undertaker the title. Those two ended up main eventing the next two PPV’s, while Bret, the WWF Champion, mind you, was stuck in the mid card wrestling The Patriot, Del Wilkes, who, while a fine pro wrestler, would never be confused as either a main eventer or title contender.

This whole period was probably the peak of ugly backstage politics in the WWF. Bret, in late 1996, had signed a 20 year contract with the WWF. By this point, September of 1997, Vince wanted to renege the deal. He told Bret that he was in “financial peril” and needed to breach the contract. Bret balked, and with good reason. Another problem of the time was, essentially, Bret’s stubbornness. The WWF was at the dawn of the attitude era, and wanted to move their programs in a more risque direction. Namely, acts like Shawn Michaels and his buddy HHH, the recently monikored DX. Bret was a 40 year old man with four kids, as well as a wrestling traditionalist. While history has shown that WWF’s sleaze mongering of the late 90’s was the correct route to go, business wise, Bret wanted no part of it. The product you see on your screens today, with questionable wrestling content? I would argue that is the product of Bret Hart’s departure from WWE, and the ascension of HHH. But I digress. 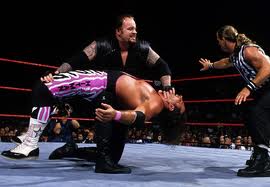 What I want to get to here is what I feel one of the best matches of all time. The WWF, for all the “financial peril” they were in at this point in 1997, decided to try running a UK only PPV. The event was named “One Night Only” and took place in Birmingham, England on September 20, 1997.

The big story of this PPV isn’t necessarily the matches. No, it was the petty backstage politicking involved. The two main events were WWF Champion Bret Hart defending his title in a rematch with the Undertaker. The other main attraction was hometown boy “British Bulldog” Davey Boy Smith defending his trophy title, the European Championship, against Shawn Michaels. Cue the ominous music. 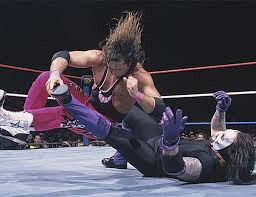 Smith was the brother in law of Bret Hart, and the European title was essentially a trophy for him given his years of WWF service. Michaels was all but set in stone to meet Bret at Survivor Series in November for the WWF title. So Michaels certainly did not need to take the Euro title from Davey Boy. But Michaels at this point was, how do I put it, a complete and utter turd backstage. A total spoon, using wrestling terminology. HBK insisted he defeat Smith for the meaningless title, as he had stated at the time that he would not job (lose) to anyone in the promotion. This was the absolute height of egomania, I feel, in any wrestling promotion ever. Michaels, while a brilliant performer, was a poison pill at this juncture. Add into the equation that Davey was defending the EUROPEAN title, in his homeland, and in front of his cancer ridden and dying sister seated ringside, and I hope you get the picture of what an asshole Shawn Michaels was. And people wonder why I despise him. To boot, the match between Smith and Michaels ended with HBK’s cronies, Chyna, Rick Rude, and HHH, cheating copiously to help their charge attain a SUBMISSION victory. Granted, that ending was Davey passing out from pain to Michaels figure four, it is still the most humiliating and de-balling way to lose in the pseudo-sport. The bigger question, though, was this: Michaels was still not full heel yet. But he had his full complement of the 82nd Airborne interfere in his match to give him the victory. Bret Hart WAS full blown heel, and he had a faction of heels to boot: The New Hart Foundation. So, while HHH, Chyna and company were interfering on Michaels behalf, WHERE THE FUCK WAS THE HART FOUNDATION? It was booking like this that lead to Hart seeing the writing on the wall.

But for Hart and Undertaker, that match outcome was not the issue. While, yes, Davey Boy was a big draw in his native land, all wrestling programs should be centered around the promotions championship. The Bret-Hart-Undertaker SummerSlam rematch was placed UNDER the European Title match, and, according to Bret’s book, not nearly as heavily promoted. The result was an amazing match, as both men were hellbent on sticking the card up Vince McMahon, and Shawn Michaels, ass. Taker even pulls off some moves he used in his previous persona, WCW’s Mean Mark Callous, that made my jaw drop. Watch for the heart punch. And make no mistake: this is the BEST Undertaker-Bret Hart match ever, and if it was given a proper finish, would have been an all-time classic. As it is, it is Bret Hart’s final WWF masterpiece.