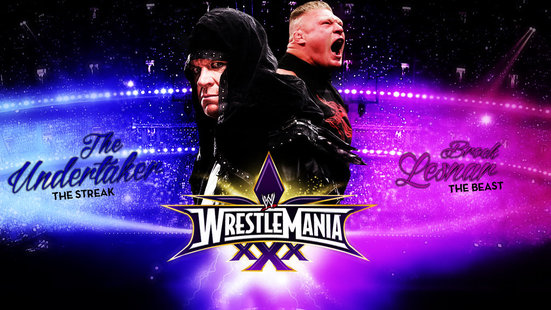 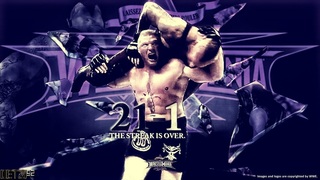 Right away, Undertaker attacks with strikes -- while Michael Cole makes the ridiculous statement that he is the "greatest striker in WWE history" -- and Lesnar counters with a hard Irish Whip in the corner followed by a belly-to-belly suplex that almost results in "The Phenom" landing on his head.

The message is clear early: Brock is a powerful, powerful man with physical advantages not shared by anyone Undertaker has wrestled in many, many years.

The match turns quickly, though, and 'Taker goes about working all the offense we've seen from him throughout the 21 years he spent keeping the streak alive. The first attempted finisher is a choke slam off snake eyes in the corner but it's reversed into an F-5 attempt that also fails. Undertaker pushes Brock into a corner and attempts to follow with a big boot but misses and his leg becomes a focal point of attack right after. 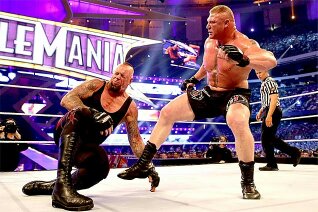 It's here the two go to the outside and Lesnar grabs a leg and sweeps Undertaker to the floor. It's been speculated to the point of outright reporting that this is the spot that gave Undertaker a concussion. The bump itself didn't look that bad and while the camera angle isn't the best, it doesn't appear as though his head bounces off the outside mat.

But I'm no doctor.

Back in the ring, Lesnar takes control while 'Taker moves slow. Really slow. Brock is methodical in his attack, allowing Undertaker to lean against the ropes while he attacks the head and body like a boxer overwhelming a dazed opponent who thinks he's working the rope-a-dope but is actually getting his ass handed to him.

But it's then that Undertaker makes a comeback and all the signature spots are back. Snake eyes into the big boot. A leg drop and near fall follows. Then, a choke slam gets a two count. He tries to follow up but Lesnar shows how quickly he can strike by rolling off Undertaker's back on a Tombstone and countering into an F-5.

'Taker kicks out and a chant breaks out for him. The crowd, at least at this point, seems invested.

Paul Heyman starts shouting for Brock to finish his opponent. Undertaker sells big on the mat and Lesnar is slow to approach. When he does, Undertaker slaps on his Hell's Gate submission, as though he was baiting the beast.

It doesn't matter. Lesnar lifts and powerbombs his way out of the hold. 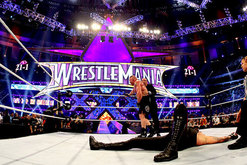 It's at this point that JBL foreshadows the end of the match with this line on commentary, including the response from Jerry Lawler and Michael Cole.

JBL: "I think we're seeing one of the greatest gladiators of all time going out like a true gladiator."

Lawler: "What do you mean going out?"

Cole: "I think you're calling this a little too early, aren't you?"

Lesnar drags Undertaker to the middle of the ring only to fall right back into the Hell's Gate submission, although it is not applied properly. They repeat the spot they just worked with Lesnar getting Undertaker up higher than he had before, and this time when he slams "The Deadman" down, 'Taker's head visibly smacks against the mat.

They exchange submission attempts. Nothing gives. Back to their feet and Lesnar laying shoulder blocks in the corner is eventually countered by a big boot. 'Taker looks wobbly but he goes to the ropes for Old School anyway. He appears to nearly lose his balance walking the top rope and Brock grabs him, puts him on his shoulders, and hits the second F-5 of the match.

If Undertaker is concussed at this point that's a high impact spot that only made things worse. 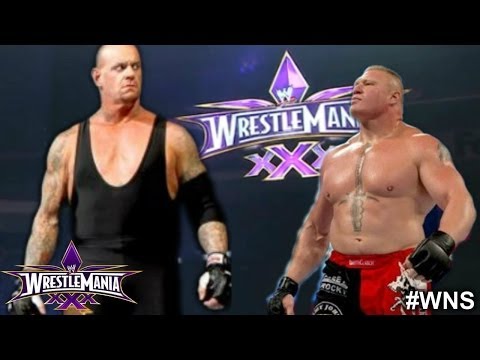 He crawls to the ropes to assist him in getting to his feet and Lesnar walks up behind him to hit a German suplex. He does another and both times Undertaker's head smacks off the mat. The second one looked particularly rough and when the camera gets close, 'Taker looks dazed. Actually, he has that far off look, like the lights are on but nobody is home.

While Undertaker is trying to recover in one corner, and not having much success, Lesnar is in the other corner with Heyman screaming in his ear that he is the "1" in "21-1" and don't let Undertaker take this away from him. "YOU'RE BROCK LESNAR! YOU'RE A CONQUERER!"

Brock responds with kicks and punches to a downed "Deadman". There's hardly any response. Lesnar gets on the second rope and Undertaker is at least aware enough to do the Last Ride spot, though he was never able to lift Brock up, instead walking him across the ring and simply dropping him down. He followed that with a Tombstone that looked like he did everything he could to protect Brock and we get the head up, tongue out pinfall attempt. 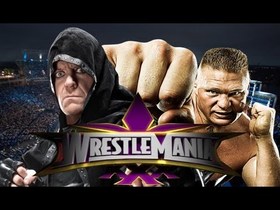 Heyman smiles big on the outside. A shocked Undertaker sits up, and Heyman appears in the backdrop, now shaking his head with his eyes closed. He knows what this could mean.

Sure enough, Undertaker slashes his throat. We've seen this before. This means the end.

When Lesnar starts to get up, Undertaker meets him there. He leans in and speaks to Brock, though we cannot hear what he says. Then he picks Lesnar up for another Tombstone but Brock drops off his back and lifts Undertaker up in the process. He's in perfect position for a Tombstone but Lesnar, the powerful beast that he is, jumps 'Taker up on his shoulders to hit yet another F-5, the third time he had done so.

The streak is over.

Heyman climbs in the ring and holds his head in his hands while screaming "OH MY GOD! YOU DID IT! YOU DID IT!" 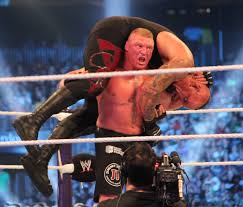 The crowd is in shock. You can hear noise but it's just a buzz. There is an odd moment when what sounds like cheering can be heard, as though something happened to make everyone think it wasn't the finish, but it fades quickly. They show the faces of those who are the most taken aback by this turn of events, which may as well have been everyone. No one understands. Later, fans in arena would say they thought there was a mistake.

To make the result clear, Justin Roberts, right on cue, gets on the microphone and does what WWE pays him to. "Ladies and gentlemen, the winner of this match ... Brock Lesnar."

Brock walks off. Undertaker is left in the ring alone. He struggles to get to his feet. We would learn later, as mentioned many times here, that he was concussed. He attempts to stand up multiple times and drops back down to one knee on more than one occasion. Was he, in his mind, simply selling the loss? Was he selling the gravity of the moment? Or was he legitimately dizzy and unable to properly get himself upright?

Maybe one day he'll tell us.

Eventually, he does stand up straight, walking to the center of the ring, looking out at nothing in particular. He is given a standing ovation. 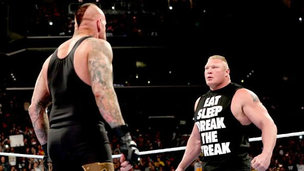 Undertaker is then shown walking to the back while he is showered with cheers and adulation. He stops at the top of the ramp. Normally, he would steal a glance back to the masses before throwing his arm up in victory.

This time he disappears into the smoke.

And we may never see him again. 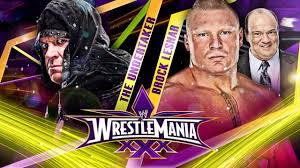 It's incredibly hard to judge this match with the benefit of hindsight. The initial argument against it was that it was too slow, a plodding, dull affair that suffered from a poor hype job in the weeks preceding it. But now that we know where the story was ultimately going, was it really as bad as we thought?

As BIGPALE so thoughtfully pointed out, they told us this was coming. They even tried to prepare us for it, though we couldn't have known as much at the time. Even death may die, and all that. Still, Lesnar wasn't presented as the monster Heyman so often fails to keep on a leash. He was afraid. His confidence that sometimes shows as cockiness was gone, in its place false bravado.

You could make the argument, at least, that Lesnar was simply caught up in all the mystic in their initial meetings. Then, just one week before WrestleMania, he turned the tables and proved Undertaker a mere mortal with one thunderous F-5.

Absent all the smoke and mirrors, all the druids and caskets, it was two men in a ring, one an aging relic, the other a physical specimen. In the end, the old dog's tricks were no match for a hungry lion.

That was the intended story of the match and while it comes across in hindsight through analysis, it wasn't as readily apparent while the match was actually happening. That's certainly a mark against it. The fact that it was so slow, concussion or not, also hurts its entertainment value, especially when compared to past Undertaker matches.

Perhaps the biggest issue was the fact that no one thought Lesnar would win. But is that a mark against it? Maybe it should be considered a plus, what with the added shock value. If nothing else it was memorable.

Personal preference is key. Undertaker didn't lose a pro wrestling match, so much as he was overpowered by a fighter he couldn't measure up to.