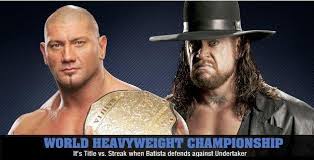 Teddy Long is out here to introduce the participants. Dave is out here first. Taker has Druids with torches, which makes his entrance painfully long. WWE have suggested this will be a "powerhouse brawl", which is my new slobberknocker terminology. Dave spears Taker to start and backs him up into the corner. Taker turns it around with punches. Dave turns it back around the crowd turns on him. Clothesline. BOO! Taker gets clotheslined outside but he drags Dave out and we get a brawl. Taker takes his big knees first ring steps bump. Dave comes off the top with a flying shoulderblock. Cole nearly sh##s himself. "I've never seen Batista come off the top rope". Dave with an explosive clothesline for 2. Taker with strikes from his knees. The crowd get the "boo", "yay" with the Dave and Taker offence. Taker with the Snake Eyes and the big boot (NOICE). Legdrop gets 2. Old School connects. Goozle! Dave breaks the hold and Taker pushes it back in Baron Von Raschke style. Taker gives up on that and tries for a flying clothesline. That goes a bit wrong. They bail to Taker to beat Dave up on the apron. Legdrop on the apron and Dave's arm was out so he slides off and lands quite hard. Taker back inside – SUICIDE DIVE! Taker continues to club away at ringside but Dave whips him into the timekeepers table. Lilian has to move out of the way pretty quickly. Dave continues the assault with vicious right hands. Dave exposes the Raw announce table. Dave climbs onto it and POWERSLAMS TAKER THROUGH THE TABLE. Back inside Dave pins for 2. Dave calls for the Demonbomb. Taker runs him back into the corner and adds in some elbows. Dave counters into the belly to belly for 2. "The streak is over..no" – Cole. Dave mounts for the 10 count (WM17 anyone?) and Taker lifts him out – LAST RIDE..for 2. Taker runs into the spinebuster. Dave calls for the finish but ZOMBIE SIT UP~! Goozle! CHOKESLAM…for 2. Taker calls for it but Dave escapes the Tombstone and hits a spear. He calls for it – DEMONBOMB…for 2. Dave decides another will finish but Taker backdrops out. Dave tries for the Tombstone but that doesn't work obviously. Taker throws him off and counters into the TOMBSTONE at 15.47 for the pin and the title. 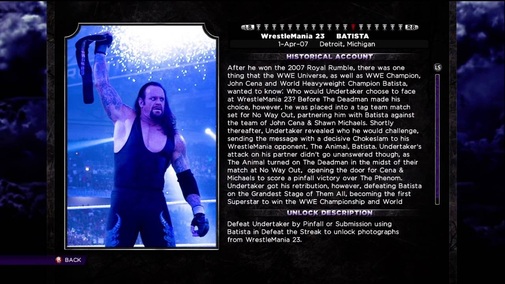