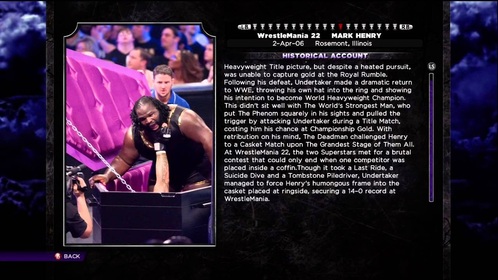 Casket Match: Undertaker vs. Mark Henry
First the minions come out carrying the casket that will be used in the match tonight. Mark Henry is out and looks tough and focused. Next out through the fire and purple smoke is The Undertaker. The Taker is 13 & 0 at WrestleMania. He has not lost a singles competition at this event, ever. Taker enters the ring as the lights lift and the crowed roars. Taker takes off his hat and hands to the announcer ring side as Mark Henry attacks from behind! Henry wastes no time to go to work. Taker hits a boot to the face of Mark Henry. Taker goes for a clothsline but Henry doesn’t fall. Another closthline but Henry does not even budge. Taker goes for another clothsline, but Henry counters with one of his own and takes the dead man down. The two men battle back and forth ringside. Back in the ring now Henry tries to maintain control. Taker tries to fight back but Henry just powers out. Henry calls for the casket to be opened. Henry tries to inch Taker into the casket, but he ain’t having it. Taker kicks out of Henry’s attempt to roll him into the casket. Taker whips Henry to the corner and delivers a clothsline. Vintage Undertaker now, Taker mounts the ropes for the balancing act and lands a falling forearm. Henry does not go down and clothsline Taker down. Henry calls for the casket again. Henry mount Taker on the middle rope. Henry charges towards taker but misses and is now standing in the casket. Taker follows and they brawl back and forth! Both men fight it out inside the casket!Henry lands a forward slam back inside the ring and Henry goes for the pin, but you can’t win that way! I guess it was done by instict. Henry calls for the casket again and sends Taker down into it. Taker quickly gets out and battles back to Henry. Henry sends Taker into the corner and Henry mounts him. Taker counters and delivers the Last Ride out of the corner onto Henry! Taker gets Henry back up and sends him head first into the casket lid. Henry now stands ringside and Taker bounces off the opposite rope comes running back…AIR DEAD MAN! Taker flies over the ropes over the casket and onto Mark Henry ringside! Back inside the ring Undertaker lifts up Mark Henry for the Tombstone piledriver and lands it! Taker calls to open the casket and rolls Mark Henry into it! The lid is closed!
﻿Winner: The Undertaker
﻿
Undertaker now 14-0 at WrestleMania. Taker and the Minions now carry Mark Henry up the ramp and backstage.