Hey, so I’ve been dreading this one. I don’t like the match, I think it’s boring and I’m not into the story. So let’s just get that out of the way right now. When you think of The Streak, do you think about the killer match Taker had with Big Show and Lord A-Train? Nothing against Big Show, or Taker, or the other one, I know I don’t think good things when I think of this match, but I am still going to be chipper. I am going to act like this is the greatest match ever because I’m sure I’ll find something to enjoy. I think we just dive in and get right into the back and hairy nitty gritty of The Undertaker’s eleventh win at Wrestlemania against The Big Show and Lord Prince Tensai at Wrestlemania XIX in Safeco. 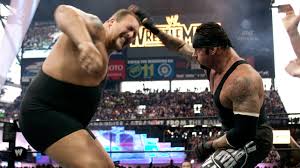 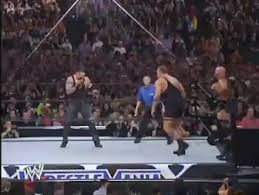 The match starts swiftly enough as The Big Show attacks from behind, but Big Evil dodges it and pulls the top rope for Show to fall to the outside. It’s a handicapped match here. The Steak is actually in trouble if you think about it. I actually think The Big Show could have handled this match by himself, but that’s just me. The match officially starts as Sweet Albert goes after The Undertaker. The Deadman hits a huge chokeslam on him early. The Big Show breaks up the cover and drags Taker to the outside. Oh right, this match was supposed to be a tag match, but Nathan Jones was victim to a beatdown by the dynamic big dudes. Regardless, Show beats on Taker and Taker beats him back. They end up in another slugfest in the ring, but Taker has it locked down. Show throws Big Evil into his corner, but The Undertaker uses it to his advantage. He hits blows on both men until he knocks Lord Albert Tensai to the outside. Okay, that joke is dead. Big Show tags out and A-Train comes in to pound on The Undertaker. The Undertaker shows some athleticism as he does a leap frog over A-Train and hits a big hip toss on him. That was impressive. He would follow it up with Old School on the big man. The Big Show has enough of a distraction on the outside for A-Train to hit the Derailer. Albert sends him to the outside for the Big Show to power Big Evil around ringside and the match has changed. The numbers game got the better of The Undertaker. 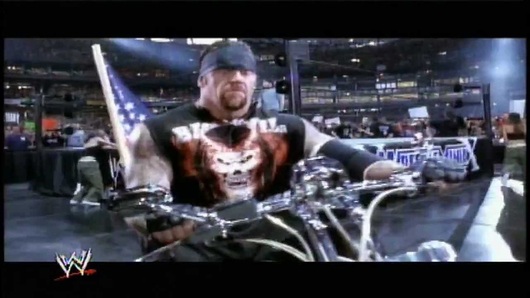 A-Train started the beatdown on The Undertaker before he tags in Big Show to do the exact same thing. The ground and pound offense of two giants should be able to handle The Deadman right? Big Show tired this philosophy, but The Undertaker fought his way out and then countered Show’s chokeslam with an armbar to the giant. A-Train ran in to make the save. He got locked into a cross armbreaker. The Undertaker was going with submissions until the Big Show dropped a massive legdrop to The Undertaker. That regained control of the match for Show and Train. Big Show hit headbutts, big headbutts and an abdominal stretch. Why doesn’t he use this move more often? It’s look awesome when he does it. Big Show grounded The Undertaker before tagging in A-Train. Train came in and did basically the same thing right down to the abdominal stretch. However, The Undertaker could power out of A-Train. Taker landed at stiff shot to A-Train and reversed him into an abdominal stretch of his own. The tables have been turned as the match continues.

A-Train powers out, but The Undertaker overpowers him with a big backsuplex. Show would take Taker on a running of the ropes and A-Train landed a powerful clothesline. The simple but powerful offense of Show and Train was working. Until A-Train started slapping and taunting The Undertaker. The Deadman took advantage and struck his way out of a bad situation and capitalized with a running DDT. Big Show interrupted the count, but The Undertaker found new life. He beat Big Show into the opposite corner of A-Train and just went back and forth giving each damage. Taker went back and forth in high gear with unlimited clotheslines in the corner until he tried to chokeslam the Big Show. He was interrupted with a run in by A-Train, but he countered him with a big boot. The Big Show tried to counter as well, but he was hit with a flying lariat. A-Train finally hit a huge Bicycle Kick on The Undertaker. Big Show then dropped The Undertaker with a huge chokeslam and it looks like the end may be near. 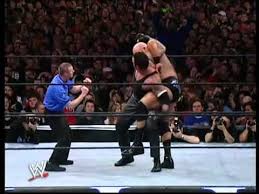 Out of nowehere, Show leaves the ring and gets a spinning heel kick to knock him out by Nathan Jones. Meanwhile, The Undertaker kicks out of the two power moves. Jones waits for his spot. The Undertaker reversed an Irish whip from A-Train. Jones slid in, hit a big boot on A-Train and The Undertaker delivered a Tombstone Piledriver for the victory. The Undertaker has now won eleven straight wins as the crowd absolutely erupts in Safeco. The Undertaker celebrated his victory with the American flag in arm. 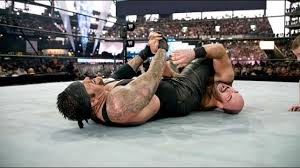 The match is okay. It isn’t as bad as I made it out to be. The issue sometimes with going back through these matches is some of them are great. You look forward to talking and reading about them, but others are just matches. They aren’t anything special, but its a win and part of the history. The problem is I’ve fantasized The Streak so much that the lesser matches just don’t feel the same. I’ve said it before, The Streak isn’t perfect, but it is undefeated. In terms of story, The American Badass survived the monsters and Jones out a nice moment. The legend of The Streak grows. It isn’t always going to be flashy, but it will always be a winning effort. That’s the name of the game. The Deadman returns soon enough and the bell tolls once again.

If you have any comments, or anything to say please write it below.