The Undertaker’s WrestleMania streak was never under much threat before the face-off against Randy Orton at WrestleMania 21. Off-course the match against Kane in WrestleMania XIV was also a near escape for The Phenom, but at that time, the dead-man was only wrestling his 7th WrestleMania match and a streak of 6-0 was hardly that magnanimous.

Orton was just a new name who was slowly but steadily going down from the next big thing of the industry to just another main-event flop. It was the time, when Batista and Cena were also establishing their foot hold in the company, and while on the same night the two fought for the title, Orton targeting the Undertaker’s streak did not take a back-seat. 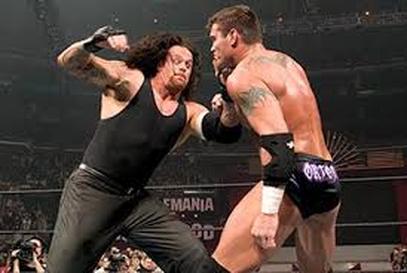 Orton was still a work in progress, but he too had his moments, moments when the audience and the world believed, that the Streak could end. As the world watched closely enough, they realised that Randy Orton had arrived. Orton’s counter to the dead-man’s chokeslam with the RKO was one of the moments of that year’s WrestleMania. While the Phenom finally prevailed as he usually does, that air of invincibility about him suddenly looked depleted, everyone realised that it can be breached, everyone realised that The Streak can end, if not today, then one day.

This was the day when the world realised the importance of Undertaker’s streak…..

If you have any comments or questions give them below.